Bionic is the sixth studio album by American recording artist Christina Aguilera, released on June 4, 2010 by RCA Records. Aguilera enlisted a wide range of producers for the project, including her longtime collaborator Linda Perry, and new collaborators including Christopher "Tricky" Stewart, Polow da Don, Ladytron, Sia and Samuel Dixon. Inspired by Aguilera's taste of electronic music, Bionic was described as an electro-R&B and future pop record. Its first half consists of mostly electropop tracks, while the second half features a more balladic production. The album's main lyrical themes are sex and feminism.

Bionic received mixed reviews from music critics, who were ambivalent towards its production and lyrical content. Commercially, the album struggled to match the chart impact and sales of her previous releases. It debuted at number three on the U.S. Billboard 200 with first-week sales of 110,000 copies, and has sold 330,000 units there as of September 2012. In the United Kingdom, Bionic debuted atop the UK Albums Chart with the lowest debut sale figure in eight years, and later became the largest drop in chart position for a number one album in the chart history. As of November 2012, the record has sold nearly one million units globally.

Bionic yielded two international singles: "Not Myself Tonight" and "You Lost Me". "Woohoo" was released in the United States and some European countries, while "I Hate Boys" was exclusively released in Australia and New Zealand. In support of the album, Aguilera made several appearances on TV and in live shows in 2010 to promote the album, including The Oprah Winfrey Show, American Idol, and Today.

On the Asian leg of the Back to Basics Tour during the summer of 2007, Aguilera said that her upcoming album would be "short, sweet and completely different" from her previous long play Back to Basics (2006). After the birth of her son, Aguilera stated in an interview with Ryan Seacrest that her forthcoming album would include a totally new aspect of herself as an artist, because of the pregnancy with her son.

In a February 2008 interview with People, Aguilera stated that she was going to start recording new material for her forthcoming album at her Beverly Hills home. DJ Premier, who at the time was working on projects for his label, Year Round Records, shared plans to head back into the studio with Aguilera, saying "She's doing an all pop album again, but she wants me to keep the tone like what we did before. She's ready to start next month." Linda Perry, who had previously worked with Aguilera was to be included in the project too. In an interview with Billboard in October 2008 Aguilera said that the album would be mostly produced by Perry. Aguilera set about contacting collaborators on her own accord, at the behest of then-husband Jordan Bratman, without relying on the record label A&R. Australian singer-songwriter Sia Furler and her collaborator Samuel Dixon worked with Aguilera on a number of tracks for the album. Aguilera told Billboard that she is a big fan of Furler and stated that she was thrilled when Furler said that she wanted to work with her as well. They recorded together in the studio in January 2009, and according to Furler's blog, the duo wrote four songs together during the sessions.

Members of British electronic band Ladytron, Daniel Hunt and Reuben Wu, went to Los Angeles to meet Aguilera in December 2008 after hearing that they were one of Aguilera's favorite bands. During the meeting, Aguilera identified what kind of Ladytron songs she liked, with Hunt later saying "We were impressed because she had a real deep knowledge of our music – album tracks, not just the singles!". Ladytron said following about the sessions with the singer, "We went in with no expectations; the whole thing was a massive surprise. But it was incredible. She was so musically talented, a vocalist who really knows her voice. The first takes sounded really amazing, and while we'd made demos, it was only when her voice was on them that it all came to life. It's nice to talk about them, we've been sitting on this for a while." They finished the work with Aguilera in March 2009 and produced 4 or 5 tracks, but only 3 songs made the final cut. Two songs produced by Ladytron appeared on the Deluxe version of the album, "Birds of Prey" and "Little Dreamer." Meanwhile, the third track, "Kimono Girl" did not make the final cut, although has been highly anticipated by fans. British band Goldfrapp said in a January 2010 interview that they did not finish the studio session and did not know whether their songs will make the final cut.

The Australian said that the production team The Neptunes were to work with Aguilera on the album. In an interview with HitQuarters, Dr. Dre protege Focus... said, "We did a song and an interlude together." He produced the beats for the track "Sex for Breakfast" which were then worked on by Aguilera and producer Noel "Detail" Fisher. Focus... got involved with the project because he and Aguilera share a loyal, long-time engineer in Oscar Ramirez and Ramirez suggested and arranged the pairing. Of the experience Focus... commented, "[Aguilera] knows exactly what she is looking for and is not afraid to tell you. It was the first project I've ever worked on where someone sent me examples and showed me exact parts in the song they were looking for." Aguilera announced on her E! Special that she was going to be working with American dance-punk band Le Tigre. Aguilera said in August 2009, that she co-wrote tracks with British Tamil songwriter M.I.A. and Santigold, and according to the producer Tricky Stewart, Flo Rida would be featured on the album. Producer Polow da Don, who produced two of the three singles released from the project, was the only producer to be suggested by RCA and not contacted by Aguilera personally.

Additionally Stewart and Claude Kelly wrote the song "Glam", which was described as "a hard club song that's about high fashion. It's really for the ladies about getting dressed and looking your best, working it in the club and getting glam and sexy before you go out. ... It will surprise people. I'm calling it a modern day "Vogue." I wouldn’t say it unless I believed it." Kelly also co-wrote three other tracks for the album, including first two singles "Woohoo" and "Not Myself Tonight". He described the four tracks as all being "up-tempo and fun, they're party anthems but at the same time have underlying messages." Commenting on the experience of working with Aguilera, Kelly said, "What people don’t know about her is that she’s actually a really good writer. She has good ideas, good melodies, good concepts … She’s really involved from the very beginning to the very end."

"Not Myself Tonight" was released as Bionic's lead single on April 6, 2010. It debuted and peaked at number twenty-three on the US Billboard Hot 100, becoming Aguilera's third solo highest debut on the chart after "Keeps Gettin' Better" (2008) and "Ain't No Other Man" (2006). Internationally, the song had a moderate commercial success, peaking at number twelve in the United Kingdom, in the top thirty in both Austria and Australia and in the top forty in New Zealand and Sweden. The song received generally positive reviews from critics, who complimented its club nature and Aguilera's vocals on the track; some reviewers also referred to it as her best uptempo recording since her 2002 single "Dirrty". The accompanying music video, directed by Hype Williams, featured a S&M theme, with Aguilera sporting different bondage-inspired looks. Paying homage to Madonna's music videos for "Express Yourself" (1989) and "Human Nature" (1995), the video received mixed reviews from critics, who complimented its aesthetic but called it unoriginal.

"Woohoo" featuring rapper Nicki Minaj was released as the second single from Bionic. It was made exclusively available to the iTunes Store on May 18, 2010 before being serviced to rhythmic radio on May 25, 2010. The track peaked at number 148 on the United Kingdom's singles chart due to high digital sales, but it was never released as a single there. The single has received generally positive reviews, with critics praising Minaj's appearance in the song and commending Aguilera's powerful vocals.

"You Lost Me" was released as the album's third single on June 29, 2010. The song was sent to Mainstream/Top 40 radio on June 29, 2010, in the United States. Leah Greenblatt from Entertainment Weekly called "You Lost Me" a "lovely" ballad and Amber James of PopEater said the song was a "somber track" that brings the "honesty and emotion that have made Aguilera one of the premier balladeers of our time." The music video premiered on Aguilera's official Vevo account on July 22. The music video's director, Anthony Mandler, also wrote the concept for the video, which features a series of connected vignettes. The song topped the US Hot Dance Club Songs chart, making it the second single from Bionic to do so, after "Not Myself Tonight".

"I Hate Boys" was released as a the second single from the album in Australia and New Zealand only. It was sent to Australian radio on June 28, 2010, and released digitally on September 3, 2010 in a two-track single. It was the eighth most added track to radio stations from the week ending July 23, 2010. It has peaked at number 28 on the Australian Airplay Chart. 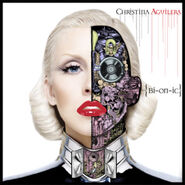 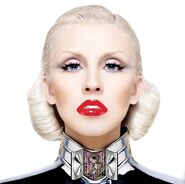 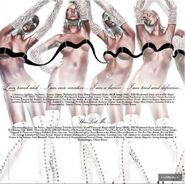 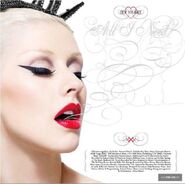 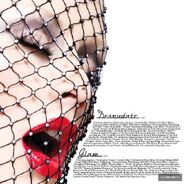 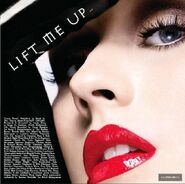 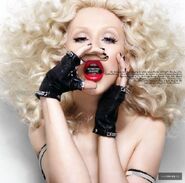 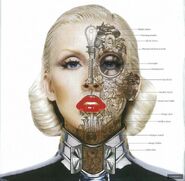 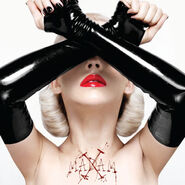 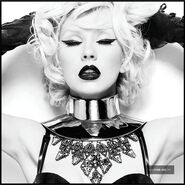 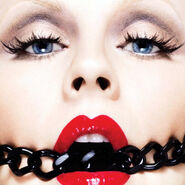 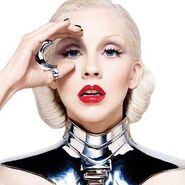 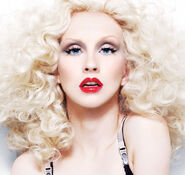 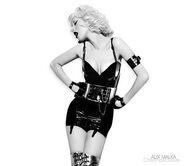 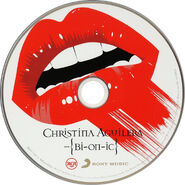 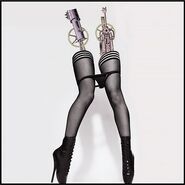 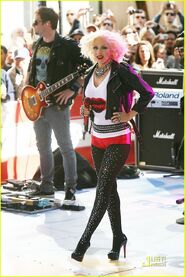 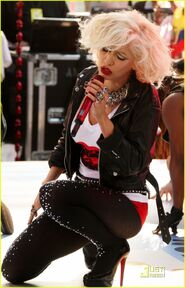 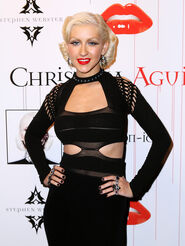 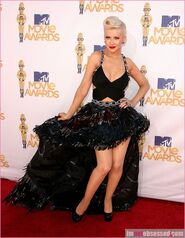 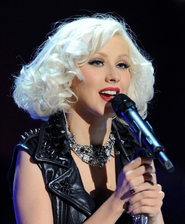 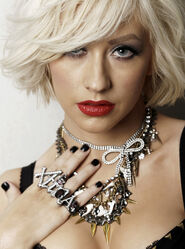 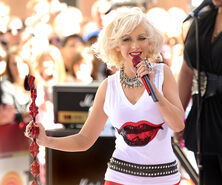 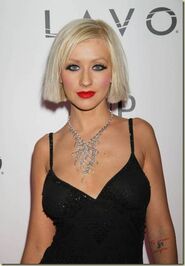