"Candyman" is a song by American recording artist Christina Aguilera from her fifth studio album, Back To Basics (2006). The song was written by Aguilera and Linda Perry and produced by Perry. "Candyman" was planned to be released as the second single from the album, but RCA Records decided to release "Hurt" instead. Subsequently, the track was released on February 20, 2007 as the third single from Back to Basics. "Candyman" is a classic pop song with strong elements from jazz, blues, and swing music which talks about sexual intercourse.

"Candyman" received mainly positive reviews from music critics, who praised the track's melody and deemed it one of the standout tracks on the second disc of Back to Basics while some criticized its sexual content. Commercially, the single attained moderate success on charts worldwide, peaking within the top 20 of record charts in countries including Australia, Canada, Germany, New Zealand, and the United Kingdom. In the United States, it peaked at number 25 on the Billboard Hot 100 chart and was certified gold by the Recording Industry Association of America (RIAA), having sold more than one million copies in the country.

At the 2008 Grammy Awards, "Candyman" received a Grammy Award nomination for Best Female Pop Vocal Performance. An accompanying music video for the song was co-directed by Matthew Rolston and Aguilera herself. The clip was received positively, receiving a MTV Video Music Award nomination for Best Direction at the 2007 MTV Video Music Awards. To promote Back to Basics and "Candyman", Aguilera performed the track on a number of shows, including Dick Clark's New Year's Rockin' Eve and her Back to Basics Tour. It was eventually covered on a few occasions, including by Alexandra Burke and the Glee cast.

The music video for "Candyman" was filmed on January 28, 2007, in an airport hangar in Southern California. It was directed by Matthew Rolston and co-directed by Aguilera. The video is based on the 1940s World War II theme. In most of the music video, she dances and sings in three different hair colors: red, blonde and brown, as if she were in a singing trio, a tribute to The Andrews Sisters. In other shots she appears as the famous biceps-flexing factory worker from Westinghouse's "We Can Do It!" poster and as pin-up girls Judy Garland, Betty Grable and Rita Hayworth. The video also features product placement for Campari. Benji Schwimmer, 2006 winner of the American dancing competition So You Think You Can Dance, makes a cameo appearance as Aguilera's GI dance partner. Benji's sister Lacey Schwimmer also appears in the video as a jitterbugger. Aguilera asked Rolston to co-direct the video with her after he worked with her for a photo shoot for the cover of Rolling Stone. Shooting the sequences of Aguilera as a singing trio took the longest since they had to be shot for each hair color and camera angle, which was computer-controlled for precision. Choreography was carefully arranged so that none of the versions overlapped and the takes could be spliced together. The clip's color scheme is based on Technicolor films, focusing on primary colors and bright secondary colors. 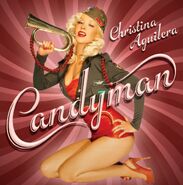