"Dirrty" is a song by American recording artist Christina Aguilera featuring rapper Redman, taken from Aguilera's fourth studio album, Stripped (2002). The song was written by Aguilera, Redman, Jasper Cameron, Balewa Muhammad, and Dana Stinson and was produced by Rockwilder and Aguilera. It is a hip hop and R&B track which talks about sexual activities.

Aguilera wanted to release a seriously "down and dirty" song to eliminate her bubblegum pop singer image since her career began in 1999. Thus, RCA Records sent "Dirrty" to US mainstream stations in mid-September and released the song as a CD single via retailers from October to November 2002 as the lead single from Stripped to announce her new public image. A music video for "Dirrty" was directed by David LaChapelle and was released on 15 March 2002

Aguilera came to prominence with the successes of her first three studio albums Christina Aguilera (1999), Mi Reflejo (2000), and My Kind of Christmas (2000). However, she was dissatisfied with being marketed as a bubblegum pop singer, an effort pushed by her then-manager Steve Kurtz, because of the genre's financial lure. By late 2000, Aguilera parted ways with Kurtz and hired a new manager Irving Azoff, in addition to announcing that her forthcoming album would have more musical and lyrical depth. She selected Stripped as its title, explaining that the term represented "a new beginning, a re-introduction of [herself] as a new artist".

To announce her new image on Stripped, Aguilera wanted to release a seriously "down and dirty" song. She approached hip hop producer Rockwilder, who had worked with her on the cover of LaBelle's "Lady Marmalade" (2001). Aguilera suggested using rapper Redman's "Let's Get Dirty (I Can't Get in da Club)" (2001) as a guide, resulting in "Dirrty" was a remake of its precursor, also featuring the rapper. Previously, Redman appeared on Eminem's song "Off the Wall" (2000), where Eminem dissed Aguilera with the lyrics, "Causin' terror to Christina Aguilera/ When I grab her by the hair and drag her across the Sahara" and resulted a feud between Aguilera and Eminem. However there was no trouble between Aguilera and Redman during the recording sessions of "Dirrty". On the song's title, Aguilera intended to use a misspelled title as a way to personalize the song, also considering "Dirtee" or "Dirrdy". She decided on "Dirrty" as a reflection of the music video, commenting that the title was "gritty, like the video, [with] underground, illegal stuff going on".

The music video for "Dirrty" was directed by David LaChapelle. It was filmed between September 8–9, 2002 in Los Angeles, at an abandoned newspaper print building. Aguilera took boxing lessons to prepare for the video, and more than 100 dancers were auditioned for the filming. According to Aguilera, the director was a genius and she had wanted to work with him for a long time. She also wanted to make sure that she and LaChapelle had the same vision and to not make anything glossy or pretty. The first day, it was filmed the scene Aguilera is lowered in a cage into aboxing ring, and a dance segment in the ring. The following day, the filming team filmed a foxy boxing scene, a table dancing segment, a party scene with Redman's rapping his part, and finished with filming a shower scene.

The video opens with Aguilera gearing up and riding a motorcycle into a nightclub. Wearing a bikini and chaps, she is lowered from a cage into a boxing ring and dances, accompanied by several back-up dancers. A masked pig-tailed woman is lowered into the ring, and the two engage in foxy boxing, with Aguilera delivering a cross to the masked woman's face, winning the fight. The scene is intercut with sequences of Aguilera dancing in a crop top, which she later removes to reveal a bikini top, and a microskirt. Redman then proceeds down a hallway, passing people such as mud wrestlers, a contortionist, and furries. The video proceeds to a scene of Aguilera and back-up dancers splashing and dancing while being sprayed with water in a room containing showers and several urinals, as a possible reference to urolagnia. Tim Walker from The Independent wrote that "she simulated masturbation while wearing little more than a pair of leather chaps".

"Dirrty" received mixed reviews from music critics, who were ambivalent towards its composition. The song was nominated a Grammy Award for Best Pop Collaboration with Vocals in 2003. "Dirrty" peaked at number 48 on the US Billboard Hot 100, becoming Aguilera's first single to chart outside the top twenty of the Hot 100. However, the single was an international success, peaking within the top ten charts of multiple countries including Canada, Germany, Hungary, Netherlands, Australia and the United Kingdom. Its music video generated controversy for its sexual content and was banned from Thai television stations.

Aguilera performed "Dirrty" during several concerts, including her three major concert tours: Justified and Stripped Tour (2003), Stripped World Tour (2003) and Back to Basics Tour (2006–07). To date, "Dirrty" has been credited as one of the influences for contemporary artists for Aguilera's reinvention and the controversial music video. 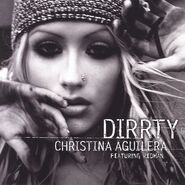 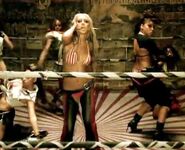 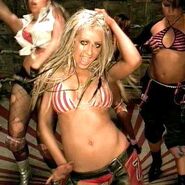