"Hurt" is a song by American recording artist Christina Aguilera. It was written by Aguilera, Linda Perry  and Mark Ronson, and produced by Perry for Aguilera's fifth studio album, Back to Basics (2006). "Hurt" was released as the album's second single on 14 May 2006 by RCA Records instead of "Candyman", which was planned to be the second one. The song's lyrical content came after Aguilera's desire to record a song about losing someone and describes how one deals with the loss of a loved one.

Perry developed the first draft of the song while Aguilera rewrote some of the lyrics, and the final version is a tribute to the pair's symbiotic teamwork. Its instrumentation comes from bass, cello, contrabass, drums, guitar, piano, viola and violin.

"Hurt" received positive reviews from music critics, who praised Aguilera's vocals and the song's production. Commercially, the song attained moderate success in the United States, peaking at number 19 on the Billboard Hot 100; it was certified gold by the Recording Industry Association of America (RIAA), having sold more than 1.1 million copies in the United States alone, according to Nielsen SoundScan. The song was a top-ten hit worldwide, reaching the top ten in Austria, Belgium and France, and received a certification in regions including Australia, Canada and Switzerland.

An accompanying music video for the song was directed by Floria Sigismondi and co-directed by Aguilera in September 2006. It depicts Aguilera as a showgirl in a circus inspired by the 1920s and 1930s, suffering from her father's death, and realizing she was too wrapped up in her stardom to deal with what matters. It was well received and was nominated for a number of awards. "Hurt" has been performed by Aguilera on several occasions, including at the 2006 MTV Video Music Awards and during her 2006–07 Back to Basics Tour. The song has been covered by aspiring singers on many music competitions around the world.

Aguilera's fifth studio album, Back to Basics, is made up of two discs. Aguilera worked with "more beat-driven" producers on the first disc, such as DJ Premierand Mark Ronson, who included samples in the production. The second disc consists solely of collaborations with producer Linda Perry. Aguilera sent letters to different producers that she hoped could help her with the direction she was taking for the project, encouraging them to experiment, re-invent and create a modern soul feel. She described the second disc as "a '20s, '30s vibe with an authentic and organic twist". Aguilera wanted to record a song about losing someone, and she asked Perry for help. Perry developed the idea while thinking about her father, who had died less than a year before the song's writing process. Perry commented,

Originally, "Candyman" was planned to be released as the second single from Back to Basics in late 2006, following the commercial success of the album's lead single "Ain't No Other Man" in June of that year. However, RCA Records decided to release "Hurt" instead because the label thought that "Hurt" would be a commercial success, similar to Aguilera's previous ballad hit "Beautiful" (2002). On September 17, 2006, RCA serviced "Hurt" to US contemporary hit radio. In November, the label released the single for CD single in Australia, Germany, and United Kingdom. An extended play (EP) containing remixes of the song was purchased for digital download onto iTunes Stores worldwide on November 21, 2006. In France, the CD edition of "Hurt" was purchased for sales on January 8, 2007

"Hurt" is a pop ballad, lasting for a duration of 4:03 (four minutes and three seconds). According to the music sheet published at Musicnotes.com by Alfred Publishing, "Hurt" is set in the key of E minor. It has a moderate tempo of 72 beats per minute. Aguilera's vocals span from G3 to E5. Its instrumentation comes from bass, cello, contrabass, drums, guitar, piano, viola and violin. Lyrically, "Hurt" is about the pain of losing someone. Joan Anderman from The Boston Globe commented that "Hurt" resembles her previous song "Beautiful" (2002), while Lindsay Levan of News & Record considered it a "intensely personal tune".

The music video for "Hurt" was shot over five days in September 2006. It was co-directed by Aguilera alongside Floria Sigismondi, who had previously directed the music video for "Fighter" (2003). She also learned stunts for the video. According to Aguilera, she "froze her butt off" during its shooting, due to the coldness. During the first day of filming, the big top tent of the cast "blew away" because of the wind, and ended up in stop shooting and change locations. The circus-themed video for "Hurt" premiered on October 17, 2006 on MTV's Total Request Live (TRL). Aguilera talked about the development of the video:

The video opens with the ending instrumental of "Enter the Circus"/"Welcome", over which a carnival barker (voiced by Linda Perry) introduces a spectacular circus, and begins in black and white. The transition to color begins when Aguilera appears in an old-fashioned dressing room, receiving flowers and then an important telegram saying, "In respect to inform you of the death of your father on the day of 02/09/1967". A flashback then shows young Aguilera, played by Laci Kay, with her father, played by Timothy V. Murphy, raptured by the sight of the tightrope walker, played by Elizabeth Glassco. With her father's encouragement, Aguilera begins to train herself to
When the video switches to older Aguilera, we see her descending from the top of a circus tent on a rope, onto the back of an elephant, in Pointe shoes and a structured jeweled outfit, with her father watching adoringly in the audience. She later attempts to greet him but is pulled away by fans and photographers keen to meet the star. The content of the telegram is then revealed to be a message of her father's death, and as Aguilera realizes that she was too wrapped up in her stardom to deal with what matters, she races through the circus in a belated attempt to find her father. The video ends with a shot of Aguilera sitting on a circus box, singing and crying, before fading out to Aguilera's grief-stricken form on the ground outside the circus tent. The camera then zooms out and Aguilera is seen on the ground. 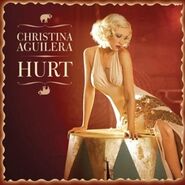 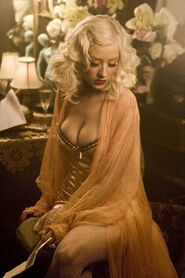 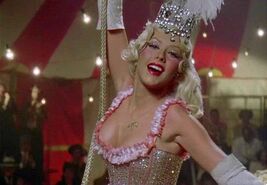