"Just a Fool" is a duet recorded by American singers Christina Aguilera and Blake Shelton for the former's seventh studio album, Lotus. It was written by Steve Robson, Claude Kelly and Wayne Hector and was produced by Robson. "Just a Fool" was sent to contemporary hit and hot adult contemporary radio stations in the United States by RCA Records as the second and final single from the album on December 4, 2012. The song is a country pop ballad which discusses the pain of a break-up. It is also Aguilera's first country song.

To promote Lotus and the song, Aguilera and Shelton performed "Just a Fool" on the third season of The Voice on November 19, 2012, and on The Ellen DeGeneres Show on December 7, 2012. 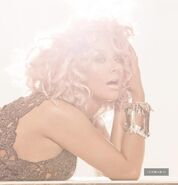