"Lady Marmalade" is a song written by Bob Crewe and Kenny Nolan. The song first became a popular hit when it was recorded in 1974 by the American girl group Labelle. In 10 March 2001 the song was featured as part of a medley in the film Moulin Rouge!. For the film's soundtrack album, Christina Aguilera, Lil' Kim, Mýa, and Pink recorded a cover version; it was released as the soundtrack's first single in spring 2001. Produced by Missy Elliott and writing partner Rockwilder, it features an intro and outro from Elliott. A lyric was changed from the original version, with the song's setting being transferred from New Orleans to the Paris nightclub Moulin Rouge.

The music video, directed by Paul Hunter, features all four performers in lingerie in a cabaret–style video (rapper Missy Elliott made a cameo appearance) and was filmed February 18-21, 2001 in (Los Angeles) with sets built to resemble the actual Moulin Rouge night club around the turn of the century (1899). Interviewed by MTV News, the ladies expressed their excitement about the video. P!nk predicted the clip would be like a "circus on acid." Christina gushed, "The video's going to be dope," while elaborating on the video's concept, "We're going to be having cabaret costumes. It's something you've never seen from us before. So, it's going to be fun." The video's art direction was anachronistically merged hip-hop sensibility with the film's French cabaret setting, thanks to some props and costumes actually used in the movie, according to Hunter's office. Choreographer Tina Landon was hired to choreograph the video. Speaking on the collaboration, Christina said she embraced the idea of collaborating with Elliott, Pink, Mýa and Lil' Kim on the track as soon as it was pitched to her. "I'm a fan of all of theirs, and just to be in the same song doing something with them — collaborating, which I love to do, is a really big thing for me," she said. "And it's cool to be out there before my next album comes out there, too."[58] The video won the MTV Video Music Award for "Best Video of the Year" and "Best Video from a Film"; it was also nominated for "Best Dance Video", "Best Pop Video", "Best Choreography" (Tina Landon), and "Best Art Direction". The song won a 2002 Grammy Award in the category of "Best Pop Collaboration with Vocals". 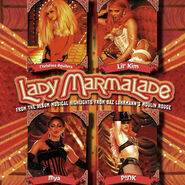 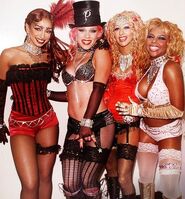 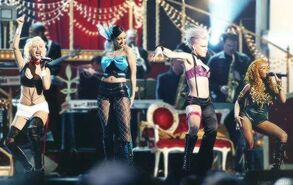 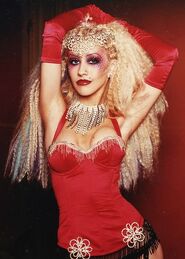 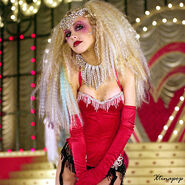 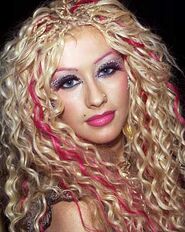 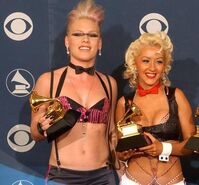 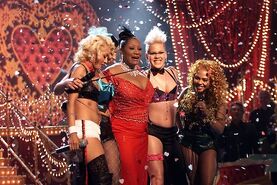