On March 15, 1990, she appeared on Star Search singing "A Sunday Kind of Love", but lost the competition at number 2. Soon after losing on Star Search, she returned home and appeared on Pittsburgh's KDKA-TV's Wake Up With Larry Richert to perform the same song. In 1991, Aguilera auditioned for a role on The Mickey Mouse Club; however, she did not meet the age requirements. Two years later, she joined the cast, performing musical numbers and sketch comedy, until the show's cancellation in 1994. Her co-stars includedJustin Timberlake, Britney Spears, Ryan Gosling and Keri Russell where they nicknamed her "the Diva"[14] for her performance style and voice. At the age of fourteen, Aguilera recorded her first song, "All I Wanna Do", a hit duet with Japanese singer Keizo Nakanishi. In 1997, she represented the United States at the international Golden Stag Festival with a two-song set. Aguilera entered talent contests on "teen night" at the Pegasus Lounge, a gay and lesbian nightclub in Pittsburgh. In 1998, Aguilera sent in a demo of her cover of Whitney Houston's "Run to You" to Disney, who were looking for a singer to record the song "Reflection" for theiranimated feature film Mulan (1998). The demo caught the attention of producer and label executive Ron Fair who would later mentor her throughout her career and led to Aguilera earning a contract with RCA Records the same week. "Reflection" peaked within the top twenty on the Adult Contemporary Singles Chart, and was nominated for a Golden Globe Award for Best Original Song.

christina you inspire me alot i bielieve that your voice is beautiful and  i love your songs. 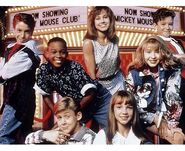